Rebranded in 2005, American INSIGHT, Inc. is a 501(c)(3) nonprofit multimedia production company with a mission to “Promote insight into Free Speech, Human Rights, and the Rule of Law.” Founded in 1983, the American Poetry Center promoted the Spoken Word for the Pennsylvania Council on the Arts before the concept became National Poetry Month. 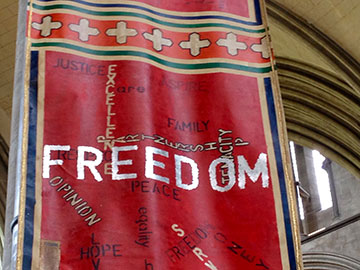 The Free Speech AWARD celebrates the principles of Free Speech, Human Rights, and the Rule of Law and is presented yearly to one film chosen via an online film festival competition. The competition draws films from around the world.

The Free Speech STORYLINE documents the evolution of Free Speech, Human Rights, and the Rule of Law since the sealing of Magna Carta in England in 1215. It provides an interactive and educational timeline of historically significant people and events. American INSIGHT’s Free Speech Award-winning film is added to the Free Speech Storyline every year.

The Free Speech ARCHIVES preserves rare footage and multimedia materials from all of American INSIGHT’s events over the organization’s thirty-year history of promoting Free Speech and the Spoken Word.

As a member of the Pennsylvania Association of Nonprofit Organizations (PANO), American INSIGHT has committed to the Guiding Principles of the Standards for Excellence: an ethics and accountability code for the nonprofit sector. American INSIGHT pledges to uphold the fundamental values of honesty, integrity, fairness, respect, trust, responsibility and accountability upon which the Standards are based.